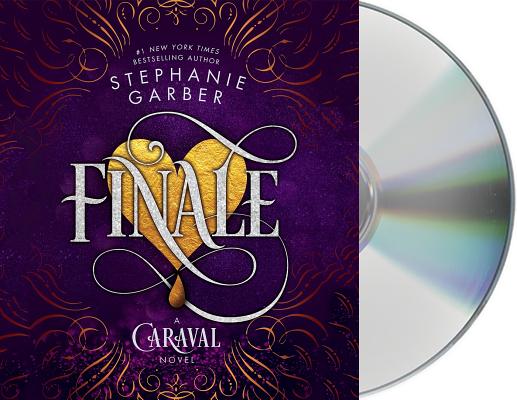 This is book number 3 in the Caraval series.

"Narrator Rebecca Soler returns for the final installment in the Caraval trilogy... The magic, the fear, the betrayal, and especially the heartbreak are all magnified by her skillful narration. An intense listen that is hard to pause." — AudioFile Magazine, Earphones Award winner

A love worth fighting for. A dream worth dying for. An ending worth waiting for.

With lives, empires, and hearts hanging in the balance, Tella must decide if she’s going to trust Legend or a former enemy. After uncovering a secret that upends her life, Scarlett will need to do the impossible. And Legend has a choice to make that will forever change and define him.

Caraval is over, but perhaps the greatest game of all has begun. There are no spectators this time: only those who will win, and those who will lose everything.

Welcome, welcome to Finale. All games must come to an end…

Stephanie Garber loves Disneyland because it’s the one place on earth where she feels as if the fantastical stories she loves to write about could actually come to life. She is the #1 New York Times and internationally bestselling author of Caraval and Legendary.

Rebecca Soler is a film and voiceover actress who won a 2009 AudioFile Earphones Award for her narration of After by Amy Efaw. Her audiobook credits include work by authors such as Judy Blume, James Patterson and Sarah Dessen. Soler has also narrated the popular young adult series The Lunar Chronicles by Marissa Meyer. Her voice over credits include various video games, like Star Wars: The Old Republic and Red Dead Redemption and television shows such as Pokemon, Yu-Gi-Oh, and Teenage Mutant Ninja Turtles. She lives in New York City.

"The magic, the fear, the betrayal, and especially the heartbreak are all magnified by her skillful narration. An intense listen that is hard to pause." -AudioFile Magazine, Earphones Award Winner