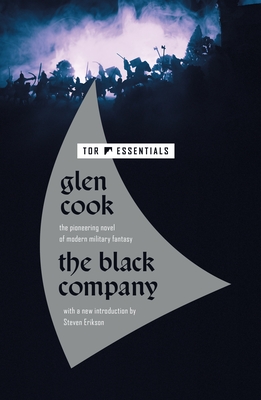 A reissue of one of the greatest dark fantasy epics of our age, Glen Cook's The Black Company.

Some feel the Lady, newly risen from centuries in thrall, stands between humankind and evil. Some feel she is evil itself. The hard-bitten men of the Black Company take their pay and do what they must, burying their doubts with their dead.

Until the prophesy: The White Rose has been reborn, somewhere, to embody good once more. There must be a way for the Black Company to find her...

“With the Black Company series Glen Cook single-handedly changed the face of fantasy.” ?Steven Erikson, author of the Malazan Book of the Fallen series

Born in 1944, Glen Cook grew up in northern California, served in the U.S. Navy, attended the University of Missouri, and was one of the earliest graduates of the well-known "Clarion" workshop SF writers. Since 1971 he has published a large number of Science Fiction and fantasy novels, including the "Dread Empire" series, the occult-detective "Garrett" novels, and the very popular "Black Company" sequence that began with the publication of The Black Company in 1984. Among his science fiction novels is A Passage at Arms.

After working many years for General Motors, Cook now writes full-time. He lives near St. Louis, Missouri, with his wife Carol.

“Over the past 25 years, Cook has carved out a place for himself among the preeminent fantasy writers of his generation . . . His work is unrelentingly real, complex, and honest. The sense of place that permeates his narrative and characters gives his 'fantasies' more gravitas and grit than most fictions set in the here-and-now.”—New York Times bestselling author Jeff VanderMeer

“A master realist of the imagination.”—Locus

“New and innovative. [Cook] blends the urban, intimate, slightly seedy tradition of sword & sorcery with the pastoral, epic, expansive tradition of heroic fantasy . . . This is the book that injected a shot of realism into the genre, and helped steer it on the course towards modern so-called 'gritty' fantasy.”—Strange Horizons, on Chronicles of the Black Company