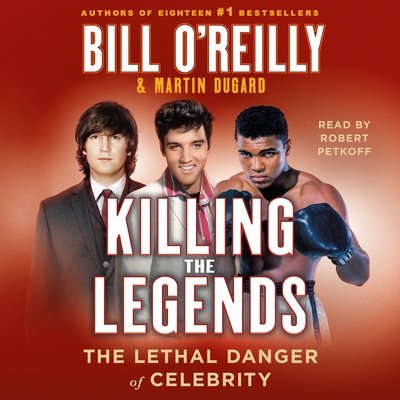 In the latest audiobook in the multimillion-selling Killing Series, Bill O'Reilly and Martin Dugard tell the larger-than-life stories of Elvis Presley, John Lennon, and Muhammad Ali.

The King is dead. The Walrus is shot. The Greatest is no more.

Elvis Presley, John Lennon, and Muhammad Ali. These three icons changed not only the worlds of music, film, and sports, but the world itself. Their faces were known everywhere, in every nation, across every culture. And their stories became larger than life—until their lives spun out of control at the hands of those they most trusted.

In Killing the Legends, Bill O’Reilly and Martin Dugard explore the lives, legacies, and tragic deaths of three of the most famous people of the 20th century. Each experienced immense success, then failures that forced them to change; each faced the challenge of growing old in fields that privilege youth; and finally, each became isolated, cocooned by wealth but vulnerable to the demands of those in their innermost circles.

Dramatic, insightful, and immensely entertaining, Killing the Legends is the twelfth audiobook in O’Reilly and Dugard’s Killing series: the most popular series of narrative history books in the world, with more than 18 million copies in print.

BILL O'REILLY is a trailblazing TV journalist who has experienced unprecedented success on cable news and in writing eighteen national number-one bestselling nonfiction books. There are more than eighteen million books in the Killing series in print. He lives on Long Island.

MARTIN DUGARD is the New York Times bestselling author of several books of history, among them the Killing series, Into Africa, and Taking Paris. He and his wife live in Southern California.

Robert Petkoff has won multiple AudioFile Earphones awards for his acclaimed narrations. He was named Best Voice of Fiction & Classics for his reading of The Evolution of Bruno Littlemore by Benjamin Hale. His other narration credits include Oath of Office by Michael Palmer, Gangster Squad by Paul Lieberman, and books by David Foster Wallace.Petkoff has appeared on Broadway, Off-Broadway, and in theaters across America and Europe.  He has worked in television and film. His theater credits include Lord Evelyn Oakleigh in the Broadway production of Anything Goes, Perchik as part of the Tony-nomianted cast of Fiddler on the Roof, and Hubert Humphrey in the Tony award-winning play All the Way. He has also had numerous roles in television on shows such as Law and Order and Married with Children.