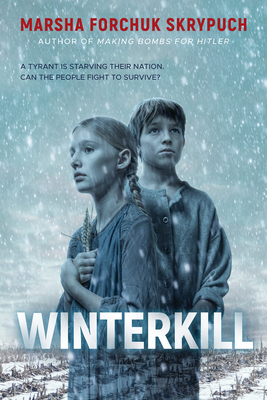 From acclaimed author Marsha Forchuk Skrypuch, this incredibly gripping and timely story set during the Holodomor in 1930s Ukraine introduces young readers to a pivotal moment in history-- and how it relates to the events of today.

Nyl is just trying to stay alive. Ever since the Soviet dictator, Stalin, started to take control of farms like the one Nyl's family lives on, there is less and less food to go around. On top of bad harvests and a harsh winter, conditions worsen until it's clear the lack of food is not just chance... but a murderous plan leading all the way to Stalin.

Alice has recently arrived from Canada with her father, who is here to work for the Soviets... until Alice realizes that the people suffering the most are all ethnically Ukrainian, like Nyl. Something is very wrong, and Alice is determined to help.

Desperate, Nyl and Alice come up with an audacious plan that could save both of them -- and their community. But can they survive long enough to succeed?

Known as the Holodomor, or death by starvation, Ukraine's Famine-Genocide in the 1930s was deliberately caused by the Soviets to erase the Ukrainian people and culture. Marsha Forchuk Skrypuch brings this deeply resonant, and remarkably timely, historical world to life in a story about unity, perseverance, and a people's determination to overcome.

MARSHA FORCHUK SKRYPUCH is a Ukrainian Canadian author acclaimed for her nonfiction and historical fiction, including Making Bombs for Hitler (Faire des bombes pour Hitler), The War Below (Soldat clandestin), Stolen Child (Enfant volée,et), and Don't Tell the Enemy (Ne dis rien l'ennemi). Marsha lives in Brantford, Ontario, and you can visit her online at www.calla.com.

"In a timely, hard-hitting novel, Forchuk (Traitors Among Us) portrays the manufactured famine Holodomor ("murder by hunger") that Stalinists inflicted on Soviet Ukrainian farmers in the early 1930s. Compassionate 12-year-old Nyl narrates the harrowing story...Juxtaposing concepts of industrialization with the rhythms of farm life, the story and its grim events, together with an elucidative author's note, provide important historical context around history that has resonance for current events." -- Publishers Weekly

Praise for Traitors Among Us:

* "Told in alternating chapters narrated in the first person by Ukrainian sisters Krystia, 16, and Maria, 14, this gripping novel tells a lesser-known story of the war's horror... this is ultimately a story of the strength of the human spirit. Krystia and Maria are survivors, and they never give up, drawing strength from remembering their parents' belief in them as they struggle to stay alive. Gripping, harsh, and superbly written." -- Kirkus Reviews, starred review

Praise for Don't Tell the Nazis:

"The first-person account, based on the real-life Krystia's memories as told to Skrypuch, reads like a memoir; despite the historically accurate body count, it retains a sense of hope. An accessible entry in a crowded, vital field, honoring those who risked everything to save others." -- Kirkus Reviews

"The author once again deftly sheds light on lesser-known aspects of the Ukrainian experience during WWII . . . A gripping exploration of war-induced trauma, identity, and transformation." -- Kirkus Reviews

"In addition to helping children understand conditions that immigrants face in current times, this stands as a deeply personal, relatable study of the long-term psychological effects of war on children, making it a useful addition to a Holocaust or World War II curriculum." -- Bulletin of the Center for Children's Books

"Excellent back matter . . . gives context to Nadia's story . . . This is a strong addition to World War II historical fiction collections, shining a light on a little-known aspect of the Nazi regime's insidious programs." -- School Library Journal

Praise for The War Below:

"Skrypuch offers a compelling, visceral novel of survival that provides an unusual view of the war... The suspenseful story carries the reader along to its satisfying conclusion." -- Booklist

"Skrypuch continues to shed light on the double jeopardy that many Ukrainians experienced... A page-turning window into a complex piece of World War II history." -- Kirkus Reviews

"A riveting read." -- YA Books Central

Praise for Making Bombs for Hitler:

"A gripping story that asks: What would you do to survive?" -- Alan Gratz, New York Times bestselling author of Refugee

"Inspired by real, historical accounts, this is a powerful, harrowing story of transformation." -- Booklist

"Skrypuch draws on real-life stories of survivors in telling Lida's poignant tale, and she creates a cast of young people who are devoted to one another in both thought and deed.... A well-told story of persistence, lost innocence, survival, and hope." -- Kirkus Reviews

"The story [has a] strong undercurrent of friendship and loyalty; an author's note gives further background on this important piece of history." -- Publishers Weekly

"Students will admire Lida's pluck amid such heinous conditions.... An absorbing read about the lesser-known Ukrainian experience during World War II, this is a solid choice for curricular ties and for middle school historical fiction collections." -- School Library Journal

"Skrypuch has written a gripping, emotional novel of one Ukrainian girl's perseverance during the horrors of war.... This is a vivid picture of what youth experienced during World War II and the hopelessness of displaced populations of all backgrounds and religions." -- Voice of Youth Advocates