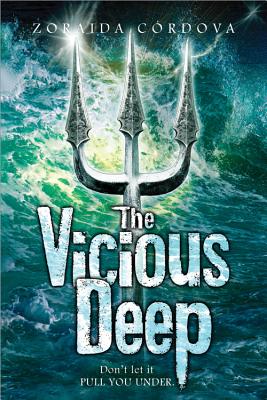 This is book number 1 in the The Vicious Deep series.

From the author of Incendiary and the Brooklyn Brujas series, a long-lost heir of the mermaid Sea Court must fight for his life, and his humanity, as he's suddenly caught in a race for a throne that is as ancient as the gods.

One crashing wave and Tristan Hart was gone for three days. Sucked out to sea in a tidal wave and spit back ashore at Coney Island with no memory of what happened. Now his dreams are haunted by a terrifying silver mermaid with razor-sharp teeth.

His best friend Layla is convinced something is wrong. But how can he explain he can sense emotions like never before? How can he explain he's the heir to a kingdom he never knew existed? That he's suddenly a pawn in a battle as ancient as the gods?

Something happened to him in those three days. He was claimed by the sea…and now it wants him back.

The Vast and Brutal Sea (Book 3)

Zoraida Córdova is the author of the award-winning Brooklyn Brujas series and The Vicious Deep trilogy. Her short fiction has appeared in Star Wars: From a Certain Point of View, and Toil & Trouble: 15 Tales of Women and Witchcraft. She is the co-editor of Vampires Never Get Old, a YA anthology forthcoming from Imprint/Macmillan in fall 2020. Her upcoming YA novels include Star Wars: A Crash of Fate, and Incendiary, book one in the Hollow Crown duology (Disney/Hyperion 2020). Zoraida was born in Ecuador and raised in Queens, New York. When she isn’t working on her next novel, she’s planning her next adventure.