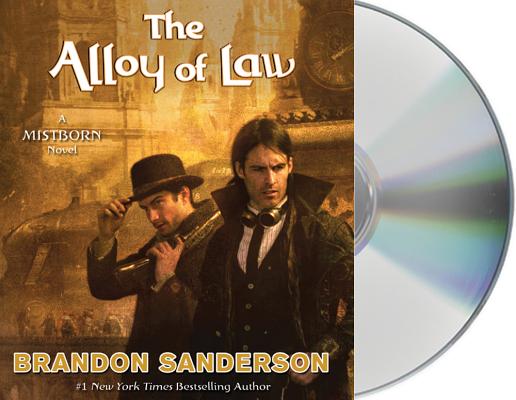 By Brandon Sanderson, Michael Kramer (Read by)
$45.99
Email or call for price.

This is book number 4 in the Mistborn series.

Kelsier, Vin, Elend, Sazed, Spook, and the rest are now part of history—or religion. Yet even as science and technology are reaching new heights, the old magics of Allomancy and Feruchemy continue to play a role in this reborn world. Out in the frontier lands known as the Roughs, they are crucial tools for the brave men and women attempting to establish order and justice.

One such is Waxillium Ladrian, a rare Twinborn, who can Push on metals with his Allomancy and use Feruchemy to become lighter or heavier at will. After twenty years in the Roughs, Wax has been forced by family tragedy to return to the metropolis of Elendel. Now he must reluctantly put away his guns and assume the duties and dignity incumbent upon the head of a noble house. Or so he thinks, until he learns the hard way that the mansions and elegant tree-lined streets of the city can be even more dangerous than the dusty plains of the Roughs.

“Kramer is the type of reader who is skillful enough to read a story without making his character voicing sound forced. He provides enough differences in character speech patterns and accents to help you easily follow the story.” —SFF Audio

“Sanderson's blend of rapid-fire action, vivid characterization, and snappy, bantering dialogue makes for a great audio experience. Reader Michael Kramer has an incredibly impressive vocal range, from the natural baritone in which he narrates to the alto he uses for women. Be smart and don't miss this one.” —Locus

“Michael Kramer performs a terrific frontiersman – laconic and drawling…This is a Western, at least in spirit, set within a fantasy world with an innovative magic system that's fun to figure out.” —AudioFile Magazine

“[The Hero of Ages] brings the Mistborn epic fantasy trilogy to a dramatic and surprising climax.... Sanderson's saga of consequences offers complex characters and a compelling plot, asking hard questions about loyalty, faith, and responsibility.” —Publishers Weekly on the Mistborn series and Brandon Sanderson

“Sanderson is an evil genius. There is simply no other way to describe what he's managed to pull off in this transcendent final volume of his Mistborn trilogy.” —RT Book Reviews (Gold Medal, Top Pick!) on The Hero of Ages on the Mistborn series and Brandon Sanderson

“It's rare for a fiction writer to have much understanding of how leadership works and how love really takes root in the human heart. Sanderson is astonishingly wise.” —Orson Scott Card on the Mistborn series and Brandon Sanderson