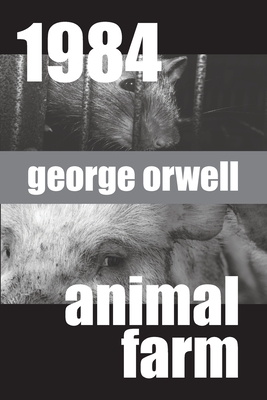 1984 and Animal Farm, two of the most disturbing and powerful novels ever written, are presented here in one volume, together with George Orwell's insightful essays "Politics and the English Language" and "Why I Write," all newly designed and typeset by Waking Lion Press.

1984
Winston Smith is a hardworking member of the Party, the ruling government of Oceania. Laboring in the Ministry of Truth, the Party's propaganda arm, he is in charge of revising history, the Party's way of controlling the past as well as the present. And Big Brother, the Party's all-powerful leader, is always watching, always making sure that everyone does exactly what they are supposed to do. This makes for an orderly society, but individuality is crushed. Even love is forbidden, with procreation under the strict supervision of the Party. But then Winston meets Julia and learns of "The Book," a forbidden publication that seems to promise a different way of life.

1984's brilliance comes from Orwell's prescient understanding of modern life--the power of the media, the loss of privacy, the distortion of language for the sake of "political correctness," and the suppression of individual thought and expression. Required reading for students since it was first published, it is one of the most disturbing and powerful novels ever written.

Manor Farm is run by its drunken owner, Mr. Jones, and his incompetent workers. Chafing under their exploitation, the animals rise up against their human masters and take over the farm. Under the guidance of the intellectually superior pigs, the animals then set out to create a paradise of progress, justice, and equality. But as time passes, their labors don't have quite the results they expected, and they begin to realize that their porcine leaders may have other purposes in mind.

On one level, Animal Farm is a simple tale about barnyard animals. On a deeper level, it is a pointed political satire about corrupted ideals, class conflict, and misdirected revolution--themes as valid today as when the book was first published. As we continue to wrestle with these issues, the cutting clarity of Orwell's masterpiece delivers an enduring warning for all who care about justice, freedom, and equality.