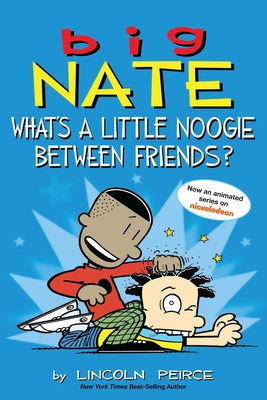 This is book number 16 in the Big Nate series.

Now an animated series with Paramount+ and Nickelodeon!

Big Nate is in a class by himself. This feisty 11-year-old holds the school record for detentions, but that doesn't stop him from dreaming big!

Nate Wright’s a winner—in his own mind, anyway. So when things go wrong, he’s at a loss to explain why. How does his soccer team manage to lose to a school with a sixty-game winless streak? What’s he doing at the movies on a Friday night . . . with GINA? And why, oh why is one of his classmates (hint: she’s Nate’s dream girl) suddenly moving 3,000 miles away? It’s all enough to make a sixth-grade superstar feel . . . well, not so super.

But you can’t keep a good man down, and Nate’s still got pals like Teddy, Francis, and Chad to cheer him up. Sure, their methods aren’t always warm and fuzzy, but Nate doesn’t mind. After all, what’s a little noogie between friends?

“Another hilarious winner in the Big Nate series of books… these are laugh out loud funny and a kid-favorite!”
(Imagination Soup)

"It is because of Nate's emotional reaction to all the things that do not go his way-- and his resilience in the face of so many reversals-- that Nate's life is so much fun to explore, for readers if not necessarily for Nate himself."  (InfoDad)