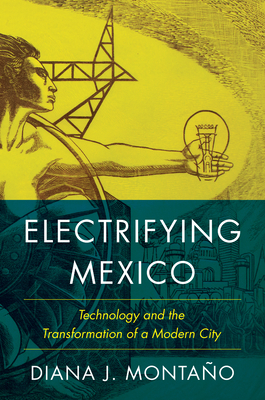 Many visitors to Mexico City’s 1886 Electricity Exposition were amazed by their experience of the event, which included magnetic devices, electronic printers, and a banquet of light. It was both technological spectacle and political messaging, for speeches at the event lauded President Porfirio Díaz and bound such progress to his vision of a modern order.

Diana J. Montaño explores the role of electricity in Mexico’s economic and political evolution, as the coal-deficient country pioneered large-scale hydroelectricity and sought to face the world as a scientifically enlightened “empire of peace.” She is especially concerned with electrification at the social level. Ordinary electricity users were also agents and sites of change. Montaño documents inventions and adaptations that served local needs while fostering new ideas of time and space, body and self, the national and the foreign. Electricity also colored issues of gender, race, and class in ways specific to Mexico. Complicating historical discourses in which Latin Americans merely use technologies developed elsewhere, Electrifying Mexico emphasizes a particular national culture of scientific progress and its contributions to a uniquely Mexican modernist political subjectivity.

Diana Montaño is an assistant professor of history at Washington University in St. Louis.

[Electrifying Mexico] shines as an in-depth exploration of the social and cultural dimensions of the introduction of electrification…indispensable to the literature on modern Mexico.
— Canadian Journal of Latin American and Caribbean Studies

Electrifying Mexico is an essential book for all students of the history of urban technologies...Electrifying Mexico provides an original contribution to the field by offering a far more complex history of electricity than had existed in previous studies, focusing on the urban cultural history of human imaginations around technology and the intangibility of electrical energy...this engaging book makes a remarkable contribution to the historiography of studying electricity in urban space from the material and symbolic point of view in Mexico, Latin America, and other geographical areas.
— Planning Perspectives