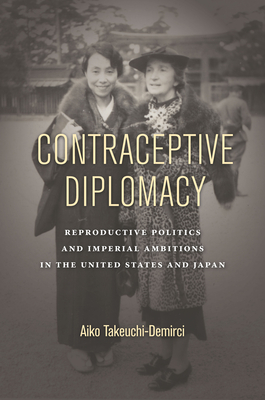 A transpacific history of clashing imperial ambitions, Contraceptive Diplomacy turns to the history of the birth control movement in the United States and Japan to interpret the struggle for hegemony in the Pacific through the lens of transnational feminism. As the birth control movement spread beyond national and racial borders, it shed its radical bearings and was pressed into the service of larger ideological debates around fertility rates and overpopulation, global competitiveness, and eugenics. By the time of the Cold War, a transnational coalition for women's sexual liberation had been handed over to imperial machinations, enabling state-sponsored population control projects that effectively disempowered women and deprived them of reproductive freedom.

In this book, Aiko Takeuchi-Demirci follows the relationship between two iconic birth control activists, Margaret Sanger in the United States and Ishimoto Shizue in Japan, as well as other intellectuals and policymakers in both countries who supported their campaigns, to make sense of the complex transnational exchanges occurring around contraception. The birth control movement facilitated U.S. expansionism, exceptionalism, and anti-communist policy and was welcomed in Japan as a hallmark of modernity. By telling the story of reproductive politics in a transnational context, Takeuchi-Demirci draws connections between birth control activism and the history of eugenics, racism, and imperialism.

Aiko Takeuchi-Demirci is a Lecturer at Stanford University.