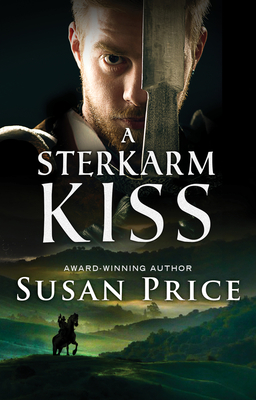 This is book number 2 in the Sterkarm series.

The follow-up to the award-winning The Sterkarm Handshake: A woman's return to Scotland's barbaric past ensnares her in a web of intrigue, danger, and love. Andrea Mitchell once found acceptance and love among the Sterkarm clan in lawless 1500s Scotland when she gained access to Great Britain's past via the FUP Corporation's "Time Tube." Since her return to the present, she has been unable to readjust to twenty-first century life. So when the company's CEO, James Windsor, offers to send her back to the violent, colorful era--and her beloved Per Sterkarm--Andrea eagerly agrees. The past she reenters, however, is not the one she remembers. To avoid potential catastrophic effects on the future, FUP has sent her to a different dimension and an alternate sixteenth century. Here, she is a stranger to her former friends, including her onetime lover Per, who is preparing to marry a daughter of the hated Grannams, the Sterkarms' sworn enemies. But the union is part of FUP's insidious plan to plunder the past of its natural wealth. When the wedding goes brutally, tragically awry, Andrea finds herself caught in the middle, a pawn in a violent endgame devised by Windsor and his greedy cronies. And this time there may not be sanctuary for her among the proud, primitive folk she once admired--or even an escape forward to the future where she truly belongs. Susan Price's The Sterkarm Handshake was awarded the Guardian Fiction Prize. In A Sterkarm Kiss, the Carnegie Medal-winning author once again ingeniously blends historical and science fiction in a masterful time-travel adventure as thrilling and unforgettable as its acclaimed predecessor.

Susan Price is the author of the Sterkarm series. Born in Dudley, West Midlands, in England, she went on to write the Guardian Fiction Prize-winning The Sterkarm Handshake (1998) after visiting reiver country on the borders of Scotland. To help her imagine the Sterkarm's world, she drew on lifelong interests in history, folklore, and old ballads, as well as her hobbies of shooting with a longbow and traveling to the Scottish hills with her partner. Price continued the series with A Sterkarm Kiss (2004) and A Sterkarm Tryst (2017). Her other works include the novel The Ghost Drum, which won the prestigious Carnegie Medal. Price lives in the Black Country, in West Midlands, England.