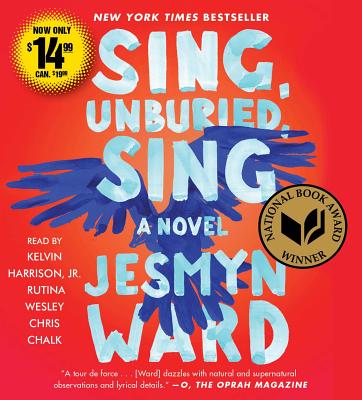 A well-deserved National Book Award winner - a powerful novel about the struggles of growing up black and poor in Mississippi. Young JoJo is a thirteen year old boy with an addicted mother and a father getting out of prison. JoJo tries to protect his toddler sister as he travels with his mother and confronts racism and violence.

“Sing, Unburied, Sing is a dark and gorgeous song of love and heartbreak, haunting and tragic and disorienting in its timelessness. The Deepwater Horizon oil spill anchors Ward's tale to Mississippi today, which is almost indistinguishable from its notorious yesterday, a present and past (ironically) made more alive in the novel by ghosts and where everyone suffers from the cancers of buried sins. On Jojo's 13th birthday, while Mam is dying and Pop struggles to keep everyone safe, Leonie plans a road trip to the prison to pick up Michael, Jojo and baby Kayla's father. It's The Odyssey meets the Delta blues meets William Faulkner and Toni Morrison and some ineffable something that is Jesmyn Ward's own magic.”
— Sara Hinckley (E), Hudson Booksellers, Marietta, GA

A finalist for the Kirkus Prize, Andrew Carnegie Medal, Aspen Words Literary Prize, and a New York Times bestseller, this majestic, stirring, and widely praised novel from two-time National Book Award winner Jesmyn Ward, the story of a family on a journey through rural Mississippi, is a “tour de force” (O, The Oprah Magazine) and a timeless work of fiction that is destined to become a classic.

Jesmyn Ward’s historic second National Book Award–winner is “perfectly poised for the moment” (The New York Times), an intimate portrait of three generations of a family and an epic tale of hope and struggle. “Ward’s writing throbs with life, grief, and love… this book is the kind that makes you ache to return to it” (Buzzfeed).

Jojo is thirteen years old and trying to understand what it means to be a man. He doesn’t lack in fathers to study, chief among them his Black grandfather, Pop. But there are other men who complicate his understanding: his absent White father, Michael, who is being released from prison; his absent White grandfather, Big Joseph, who won’t acknowledge his existence; and the memories of his dead uncle, Given, who died as a teenager.

His mother, Leonie, is an inconsistent presence in his and his toddler sister’s lives. She is an imperfect mother in constant conflict with herself and those around her. She is Black and her children’s father is White. She wants to be a better mother but can’t put her children above her own needs, especially her drug use. Simultaneously tormented and comforted by visions of her dead brother, which only come to her when she’s high, Leonie is embattled in ways that reflect the brutal reality of her circumstances.

When the children’s father is released from prison, Leonie packs her kids and a friend into her car and drives north to the heart of Mississippi and Parchman Farm, the State Penitentiary. At Parchman, there is another thirteen-year-old boy, the ghost of a dead inmate who carries all of the ugly history of the South with him in his wandering. He too has something to teach Jojo about fathers and sons, about legacies, about violence, about love.

Rich with Ward’s distinctive, lyrical language, Sing, Unburied, Sing is a majestic and unforgettable family story and “an odyssey through rural Mississippi’s past and present” (The Philadelphia Inquirer).

Jesmyn Ward received her MFA from the University of Michigan and has received the MacArthur Genius Grant, a Stegner Fellowship, a John and Renee Grisham Writers Residency, the Strauss Living Prize, and the 2022 Library of Congress Prize for American Fiction. She is the winner of two National Book Awards for Fiction for Sing, Unburied, Sing (2017) and Salvage the Bones (2011). She is also the author of the novel Where the Line Bleeds and the memoir Men We Reaped, which was a finalist for the National Book Critics Circle Award and won the Chicago Tribune Heartland Prize and the Media for a Just Society Award. She is currently an associate professor of creative writing at Tulane University and lives in Mississippi.