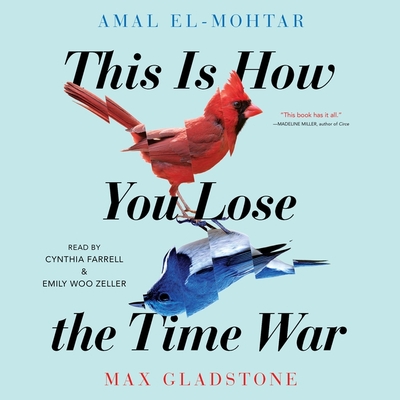 Weird and compelling sci-fi in the best way - I loved it.  The book tells of a battle through the eons between two time-travelling warriors, told in an exchange of taunting and mysterious letters left behind at the scenes of battle.

I was so enchanted by this book that once I finished it, I started it over from the very beginning. I have reread it many times and each time I find something new to marvel. It's beautiful, lyrical, gripping, epic and incredibly romantic, leaving its scent on readers like a fragrance transferred between loves.

Two time-traveling agents from warring futures, working their way through the past, begin to exchange letters--and fall in love in this thrilling and romantic book from award-winning authors Amal-El Mohtar and Max Gladstone.Among the ashes of a dying world, an agent of the Commandant finds a letter. It reads: Burn before reading. Thus begins an unlikely correspondence between two rival agents hellbent on securing the best possible future for their warring factions. Now, what began as a taunt, a battlefield boast, grows into something more. Something epic. Something romantic. Something that could change the past and the future. Except the discovery of their bond would mean death for each of them. There's still a war going on, after all. And someone has to win that war. That's how war works. Right? Cowritten by two beloved and award-winning sci-fi writers, This Is How You Lose the Time War is an epic love story spanning time and space.