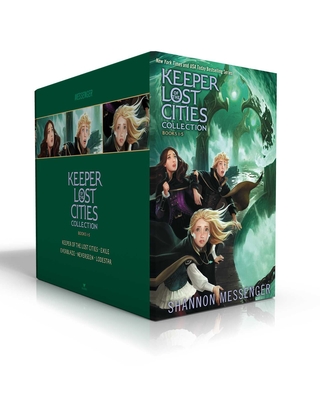 From Clayton, a young guest reviewer:

Sophie Foster is 12 ½ years old and she is already in high school. At a class field trip, someone comes out of the blue and tells her that she is not human, but an elf. She has to leave, and try to fit into a new world. I personally like this book series because it makes me wonder if our reality is the way it seems.

A telepathic girl is the key to an unknown world and it’s up to her to save it in the thrilling Keeper of the Lost Cities series. The first five books are now available as a collectible paperback boxed set!

Sophie Foster has never quite fit into her life. The reason? Sophie’s a Telepath, someone who can read minds. No one knows her secret—at least, that’s what she thinks…

It turns out the reason Sophie has never felt at home is that, well…she isn’t. And as she sets out for a new life that is vastly different from what she has ever known, telepathy is just the first of many shocking secrets that will be revealed.

Shannon Messenger graduated from the USC School of Cinematic Arts, where she learned—among other things—that she liked watching movies much better than making them. She’s studied art, screenwriting, and film production, but she realized her real passion was writing stories for children. She’s the New York Times and USA TODAY bestselling author of the award-winning middle grade series, Keeper of the Lost Cities, as well as the Sky Fall series for young adults. Her books have been featured on multiple state reading lists, published in numerous countries, and translated into many different languages. She lives in Southern California with her family—and an embarrassing number of cats. Find her online at ShannonMessenger.com.