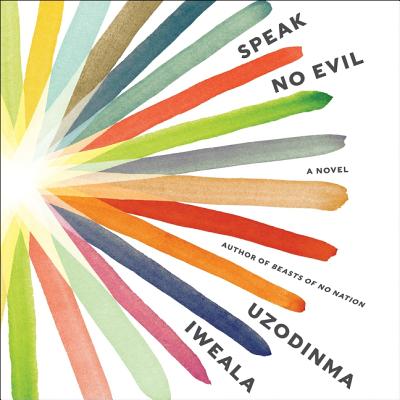 “'This is who I am.' 'This is what happened to me.' These are the simplest of expressions, yet the ability to speak them fully is a privilege not shared by the teenaged protagonists of this novel. Nigerian immigrant and Harvard-accepted aspiring doctor Niru is not able to tell his conservative religious parents that he is gay. The daughter of D.C.'s political elite, Meredith is not able to tell the world what really happened in an alley outside a bar on a hot spring night. Speak No Evil describes how loving relationships are strained, how trust is shattered, and how bodies can be broken when the truth is silenced. This heartbreakingly beautiful story will stay with you for a long time.”
— Jill Zimmerman, Literati Bookstore, Ann Arbor, MI

“We wouldn’t be a D.C. bookstore if we weren’t excited about Uzodinma Iweala’s new novel, Speak No Evil. Iweala deftly delves into the Nigerian immigrant community in D.C. with his teenage protagonist, Niru, a star student athlete at a prestigious private school whose secret of being queer is discovered and met with severe consequences. A story about the bonds—and limitations—of friendship, family, and culture, Speak No Evil delivers on every count.”
— Angela Spring, Duende District, Washington, DC

In the long-anticipated novel from the author of the critically acclaimed Beasts of No Nation, a revelation shared between two privileged teenagers from very different backgrounds sets off a chain of events with devastating consequences.

On the surface, Niru leads a charmed life. Raised by two attentive parents in Washington, D.C., he's a top student and a track star at his prestigious private high school. Bound for Harvard in the fall, his prospects are bright. But Niru has a painful secret: he is queer--an abominable sin to his conservative Nigerian parents. No one knows except Meredith, his best friend, the daughter of prominent Washington insiders--and the one person who seems not to judge him.

When his father accidentally discovers Niru is gay, the fallout is brutal and swift. Coping with troubles of her own, however, Meredith finds that she has little left emotionally to offer him. As the two friends struggle to reconcile their desires against the expectations and institutions that seek to define them, they find themselves speeding toward a future more violent and senseless than they can imagine. Neither will escape unscathed.

In the tradition of Junot Diaz's The Brief Wondrous Life of Oscar Wao and Chimamanda Ngozi Adichie's Americanah, Speak No Evil explores what it means to be different in a fundamentally conformist society and how that difference plays out in our inner and outer struggles. It is a novel about the power of words and self-identification, about who gets to speak and who has the power to speak for other people. As heart-wrenching and timely as his breakout debut, Beasts of No Nation, Uzodinma Iweala's second novel cuts to the core of our humanity and leaves us reeling in its wake.