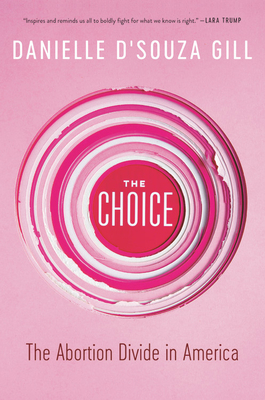 See the debate on abortion from a new perspective as a young conservative discusses the effects that modern culture and politics have had on both sides of the argument.

Danielle D'Souza Gill, in a pathbreaking new book, blows the lid off the abortion debate, which is radically different than it was when the Supreme Court issued its landmark ruling of Roe v. Wade in 1973. Technology has transformed the landscape and allowed people to see development in the womb. Ultrasound has rendered many old assumptions about abortion obsolete.

The Democratic Left has become radicalized on abortion. It is no longer a necessary evil, but a positive good. Consequently, the Left has legitimized a form of mass killing in this country that dwarfs the deaths caused by cancer, smoking, homicide, terrorism, and war.

Writing with freshness, intelligence, and insight, Danielle explores the contours of the debate, taking into account new ideas, new technology, and new laws and putting forth a new vision for a life-affirming society.

In Socratic style, Danielle builds her case in response to the strongest contentions of the pro-choice camp. She engages their most powerful arguments head-on, carefully examines them, and then dismantles them. The result is a pro-life argument so persuasive that it will reach into the heart of the most hardened opponent.

While it is a heartbreaking book, it is in the end inspiring. No matter what you believe about abortion, this book will educate, astonish, and deeply move you. It may move you to a position different from what you now hold.

If you read one book about abortion, make it this one, The Choice: The Abortion Divide in America.

Danielle D'Souza Gill is a young author and commentator who lives in New York City. A graduate from Dartmouth College, and the author of YGod: An Intelligent Discussion on the Relevance of Faith, she has also filmed videos for PragerU, has been a Turning Point USA ambassador, and been on various tv and radio networks including Fox News, One America, Newsmax, and Salem Radio. She is the youngest Advisory Board member of Women for Trump, a coalition of Donald J. Trump's campaign. The Choice: The Abortion Divide in America, is her second book.

"In a time when the pressure from Hollywood, the mainstream media and peers is to conform to leftist ideals, Danielle continues to stand up and speak out on behalf of freedom-loving patriots and for those who cannot speak for themselves. She is a remarkable young woman who inspires and reminds us all to boldly fight for what we know is right."
-Lara TrumpHost of Real News Insights and The Right View


"In the Civil War, America ended the national sin of slavery, but what of our present national abomination? In The Choice, Danielle D'Souza Gill gives the grim subject of abortion the treatment it deserves. May God use this book to help America do the right thing once again."
- Eric MetaxasAuthor of Bonhoeffer: Pastor, Martyr, Prophet, Spy, and host of the nationally syndicated Eric Metaxas Show.


"The torch burns brightly for life in The Choice. Danielle presents a game changing perspective; a must read."
-Dr. Alveda C. KingNiece of Dr. Martin Luther King Jr., Director of Civil Rights for The Unborn


In Choice: The Abortion Divide in America, Danielle D'Souza Gill does what so many are afraid to do. She challenges people to actually think about abortion, and addresses head-on the key arguments from the perspectives of biology, philosophy, the Constitution, and the experience of those who have witnessed and undergone abortion. This book is a must-read for all who are concerned about what Danielle accurately describes as "the most urgent issue of our time."
--Fr. Frank PavoneNational Director of Priests for Life, President of National Pro-life Religious Council


"I went from the foster house all the way to the White House because my mother decided to give me my right to life even though she was told to abort me because she was on drugs and financially unstable. We all have a right to live and pursue happiness and that's what The Choice is about. My friend Danielle Dsouza Gill has written a great book on an important subject. Many people think others' lives are not worth living, but Danielle D'Souza Gill shows us that they are. I learned a lot from it and so will you."
-Terrence Williams Comedian and Commentator


Now more than ever, we need books like The Choice to help us learn the 'why' so that we can be powerful apologists for our cause. The Choice is a powerful tool to not only help pro-lifers navigate pro-choice arguments, but it will help them find their voice. Pro-lifers who read this will be convicted and pro-choicers who read may just be converted—Abby Johnson, former clinic director at Planned Parenthood and the author of "Unplanned: The Dramatic True Story of a Former Planned Parenthood Leader's Eye-Opening Journey Across the Life Line"