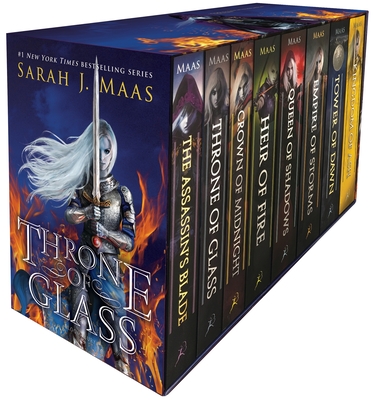 "One of the best fantasy series of the past decade." -TIME Magazine

Discover the worldwide phenomenon of the #1 New York Times-bestselling Throne of Glass series in this gorgeous 8-book paperback box set, complete with an exclusive poster!

When magic has gone from the world, and a vicious king rules from his throne of glass, an assassin comes to the castle. She does not come to kill, but to win her freedom. If she can defeat twenty-three killers, thieves, and warriors in a competition to find the greatest assassin in the land, she will become the king’s champion and earn her freedom. Her name is Celaena Sardothien – beautiful, deadly, and destined for greatness.

But as dark forces gather on the horizon—forces which threaten to destroy her entire world—Celaena must fight to protect everything she holds dear, thrusting her into the epic, heart-stopping fantasy series that has turned #1 New York Times bestselling author Sarah J. Maas into a worldwide phenomenon.

Fans new and old will dive into this box set that contains a 4-color poster and paperback editions of the entire series: The Assassin’s Blade, Throne of Glass, Crown of Midnight, Heir of Fire, Queen of Shadows, Empire of Storms, Tower of Dawn, and the thrilling finale, Kingdom of Ash.

Sarah J. Maas is the #1 New York Times and internationally bestselling author of the Throne of Glass, Court of Thorns and Roses, and Crescent City series. Her books have sold millions of copies and are published in thirty-seven languages. Sarah lives with her husband, son, and dog.

“Fans will delight in this gorgeous edition. . . . Action-packed and full of insight into Celaena's character. . . . What a ride!” - Booklist, The Assassin's Blade

“A must-read for lovers of epic fantasy and fairy tales.” - USA Today, Throne of Glass

“An epic fantasy readers will immerse themselves in and never want to leave.” - starred review, Kirkus Reviews, Crown of Midnight

“Maas shines as a brilliant storyteller. . . . The most exhilarating installment yet.” - RT Book Reviews, Heir of Fire

“Impossible to put down.” - Kirkus Reviews, Queen of Shadows

“A compelling story of hard-fought growth and redemption.” - Kirkus Reviews, Tower of Dawn

“A worthy finale to one of the best fantasy book series of the past decade.” - TIME Magazine, Kingdom of Ash