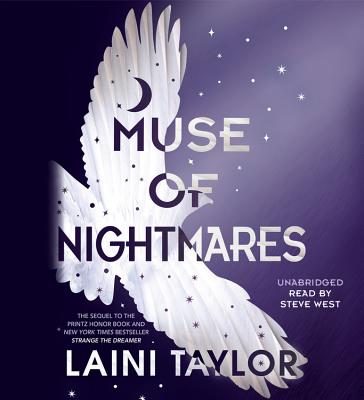 Lazlo faces an unthinkable choice--save the woman he loves, or everyone else?--while Sarai feels more helpless than ever. But is she? Sometimes, only the direst need can teach us our own depths, and Sarai, the muse of nightmares, has not yet discovered what she's capable of.

Laini Taylor is the New York Times bestselling author of the Printz Honor Book Strange the Dreamer and its sequel, Muse of Nightmares. Taylor is also the author of the global sensation the Daughter of Smoke & Bone trilogy and the companion novella Night of Cake & Puppets. Taylor's other works include the Dreamdark books: Blackbringer and Silksinger, and the National Book Award finalist Lips Touch: Three Times. She lives in Portland, Oregon, with her husband, illustrator Jim Di Bartolo, and their daughter, Clementine. Her website is lainitaylor.com.

Praise for Muse of Nightmares
A Chicago Public Library Best Book of 2018
A 2018 Booklist Editors' Choice
* "It is here, perhaps, that Taylor shines the brightest: she's always been a wordsmith, and this book is no exception."—Booklist, starred review

"A sequel that surpasses the original."—Kirkus Reviews

"Laini Taylor is so damn good and like no other."
—Leigh Bardugo, #1 New York Times bestselling author of Six of Crows and Crooked Kingdom

"Laini Taylor set my imagination on fire so hard that it spontaneously combusted...This is the kind of story that paves dreams."—p.p1 {margin: 0.0px 0.0px 0.0px 0.0px; font: 13.0px Times}Roshani Chokshi, author of The Star Touched Queen

"Weighty as a nightmare and as transportive as the finest of fantasy, Laini Taylor's new novel will leave readers with miracles on their minds."—p.p1 {margin: 0.0px 0.0px 0.0px 0.0px; font: 13.0px Times}Hypable

* "Gorgeously written in language simultaneously dark, lush, and enchanting, the book will leave readers eager for the next."
—Publishers Weekly, starred review

* "...Characters are carefully, exquisitely crafted, the writing is achingly lovely, and the world is utterly real...This is a thing to be savored."
—Booklist, starred review

* "[Strange the Dreamer] has all the rich, evocative imagery and complex world-building typical of Taylor's best work. This outstanding fantasy is a must-purchase for all YA collections."—School Library Journal, starred review

* "The luxurious prose and complex world building invites and rewards slow reading....Here readers will find characters to love and ones to hate and, ultimately, a world to be willingly lost in."
—Bulletin of the Center for Children's Books

* [Readers] will dive into Taylor's gorgeous prose and brilliant imagery and relish this story about dreams, love, monsters, gods, ghosts, war, and alchemy. Told from alternating points of view, this is complex but satisfying, a story about cultures meeting and clashing."
—VOYA, starred review

"[Laini Taylor] has spun another mesmerizing tale with captivating twists and turns, an array of intriguing characters, strange and beautiful language, and baroque flourishes of the imagination."
—Horn Book

"Lovers of intricate worldbuilding and feverish romance will find this enthralling."
—Kirkus Reviews