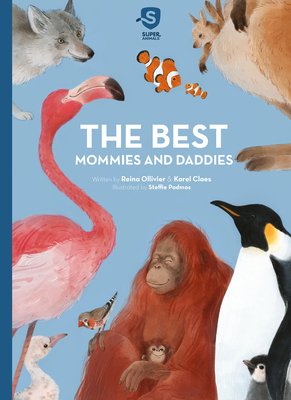 Adorable book Beautiful illustrations What a fun way to teach kids about certain animals- by relating them to their moms & dads. Parents are the center of the world to kids. This book really gives them a centered comparison they'd understand. There are lots of facts but they're laid out in little sections which makes it much less overwhelming. This would be a great intro to a research project or a compare/contrast writing piece on animals life to their life (parents). - VR (Educator)

For animals, mommies and daddies are also very important. And the nine animals you'll get to know in this book are very caring parents Discover the world of the emperor penguin, the fox, the orangutan, the clown fish, the American flamingo, the red kangaroo, the zebra finch, the wolf, and the yellow seahorse.

Meet the best mommies and daddies in the animal kingdom in the second book of the "Super Animals" series. For little biologists ages 5 years and up.

Reina Ollivier (Ukkel, Belgium, 1956) studied German languages at the University of Brussels (KUB) and Leuven (KUL). She combined writing with teaching at secondary schools, but now she is a fulltime author and (crowned) translator. Young children have an open mind and are longing to learn, that's why Reina loves to give the information in an attractive and playful manner. At Clavis Publishing Company she worked at the Willewete-series and together with Dixie Dancercoeur she wrote the thrilling series about Emma Dewitt and her adventures in the polar regions against the background of climate change, for children ages 10 years and up. Karel Claes was born in 1955, in Vilvoorde (Belgium). He studied Literature, Philosophy, and Communication. He was director of Doctors Without Borders, made children's and youth programs for the Belgian national television, was editor-in-chief of children's magazines Zonneland and Zonnestraal and for many years he published a successful series of articles on important life issues. Karel loves traveling, sailing, playing tennis, cross-country skiing, swimming, and reading. Steffie Padmos studied illustration at the art academy in Maastricht (NL) and Bath (UK) and obtained her master's degree in Scientific Illustration. Her work is characterized by craftsmanship, an eye for detail, and an interest in nature. Because of her background as a scientific illustrator, Steffie has a lot of experience in depicting complex biological and medical subjects, but she has a much broader orientation. She also illustrates for museums and publishers of children's books. Steffie works in different styles and techniques, both analog and digital, depending on the specific assignment. Steffie's lives in Amsterdam, with her two children and partner.