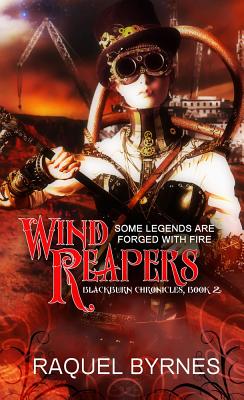 This is book number 2 in the Blackburn Chronicles series.

Charlotte Blackburn—Hero, hunted, the unwitting symbol of a dark rebellion—she thwarted the deadly intent of the treacherous Order of the Sword and Scroll, but at a shattering cost. Now, she fights to survive among a tribe of fierce Wind Reapers who troll the wasteland aboard massive metal walkers. But a new storm is brewing and Charlotte is once again the linchpin in a deadly plan.


Sebastian Riley has one goal: Help the citizens of his floating Outer City to survive the Ashen Croup, a terrible affliction that drowns victims in their own lungs. But help comes in the form of the infamous Lady Blackburn, a woman wanted for treason who is determined to run headlong into destruction to prevent a coming war—even if it means reaching out to those who want her dead.


Pursued by the shadowy Order and hunted by the furious Reaper clan, Riley and Charlotte brave the monstrous hordes of decaying Tremblers and the terrors of the Wasteland to stop the bloodshed and secure a mysterious calculating engine—a device that can bring about the destruction of an entire nation.


With brutal forces gathering against the unsuspecting citizens inside the Tesla domes, a vicious scientist intent on capturing Charlotte for his experiments, and the whole of the country in deadly peril, one of them must make a sacrifice too terrible to comprehend.

Raquel Byrnes writes across several genres including YA Steampunk, Fantasy, and Gothic Mystery. Known for edge of your seat stories with complex characters and heart pounding thrills, she is always looking for another adventure in which to partake. When she's not writing she can be seen geeking out over sci-fi movies, reading anything she can get her hands on, and having arguments about the television series Firefly in coffee shops. She lives in Southern California.