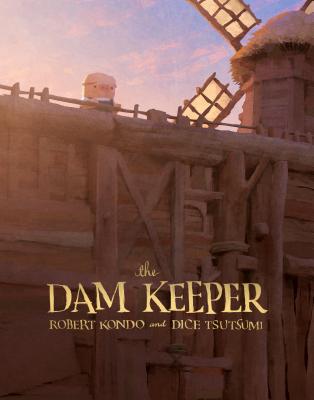 This is book number 1 in the The Dam Keeper series.

The illustrations and premise of this book are truly unique. A postapocalyptic world populated by cute yet beautifully rendered animals. Adults will love the unique style and kids will follow without any trouble. Ages 10+

Life in Sunrise Valley is tranquil, but beyond its borders lies certain death. A dangerous black fog looms outside the village, but its inhabitants are kept safe by an ingenious machine known as the dam. Pig’s father built the dam and taught him how to maintain it. And then this brilliant inventor did the unthinkable: he walked into the fog and was never seen again.

Now Pig is the dam keeper. Except for his best friend, Fox, and the town bully, Hippo, few are aware of his tireless efforts. But a new threat is on the horizon—a tidal wave of black fog is descending on Sunrise Valley. Now Pig, Fox, and Hippo must face the greatest danger imaginable: the world on the other side of the dam.

Based on the Oscar-nominated animated short film of the same name, The Dam Keeper is a lush, vibrantly drawn graphic novel by Tonko House cofounders Robert Kondo and Dice Tsutsumi.

"A beautifully realized, wonderfully painted tale of courage and mystery." —Shaun Tan, author of The Arrival

"The Dam Keeper is beautiful in every way a graphic novel can be beautiful. A stunner." —Gene Luen Yang, National Ambassador for Young People's Literature and author of American Born Chinese

With a startling sincerity and an almost alchemical use of light , The Dam Keeper manages to believably place very cute animals in an incredibly dark and complex world. I've never seen anything quite like it before."
—Brian Selznick, Caldecott winning author of The Invention of Hugo Cabret

"Merged with profound and touching coming-of-age themes, The Dam Keeper invites a groundswell of emotion." —Paste

"Kondo and Tsutsumi have created what feels like an instant classic, perilous and terrifying but full of heart, with immersive artwork and a rewarding story. Unmissable." —Kirkus Reviews, starred review

"The tug-of-war between light and dark extends out of the plot and right into the images in a haunting story that contrasts the power of friendship with the weight of responsibility and the capacity for growth." —Publishers Weekly, starred review

"Beautiful artwork and heartening relationships among the animal characters." —Booklist