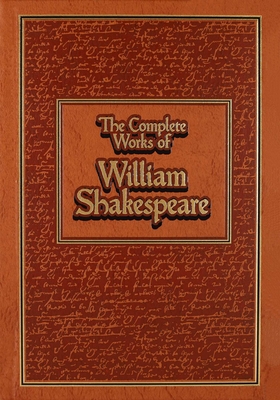 By William Shakespeare, Michael A. Cramer, PhD (Introduction by)
$29.99

No library is complete without the classics! This leather-bound edition includes the complete works of the playwright and poet William Shakespeare, considered by many to be the English language’s greatest writer.

Romeo and Juliet, A Midsummer Night’s Dream, King Lear, Hamlet, and Macbeth—the works of William Shakespeare still resonate in our imaginations four centuries after they were written. The timeless characters and themes of the Bard’s plays fascinate us with their joys, struggles, and triumphs, and now they are available in a special volume for Shakespeare fans everywhere. This Canterbury Classics edition of William Shakespeare’s works includes all of his poems and plays in an elegant, leather-bound, keepsake edition. Whether for a Shakespeare devotee or someone just discovering him, this is the perfect place to experience the drama of Shakespeare’s words. A scholarly introduction provides additional context and insight into the poems and plays. Specially designed end papers, a ribbon bookmark, and other enhancements complete the package and make this the perfect gift for any lover of literature—a book to read and treasure!

Born in 1564 in Stratford-upon-Avon, Warwickshire, England, William Shakespeare is widely regarded as the greatest writer and playwright in the English language. In 1594 he founded the acting company the Lord Chamberlain's Men, later the King's Men, in London. He died in 1616.

Michael A. Cramer, PhD, is a writer, an actor, and a filmmaker, who teaches communications at City College of New York and at Borough of Manhattan Community College. He is the author of A Confederacy of Whores: Media and Politics in George W. Bush's America and Medieval Fantasy as Performance: The Society for Creative Anachronism and the Current Middle Ages, as well as numerous articles, short stories, screenplays and chap-books. He lives in Brooklyn, New York.