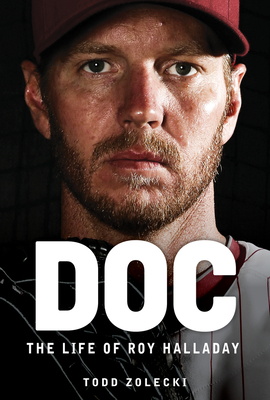 He was born and raised to be a superstar. He was a first-round draft pick in 1995. He nearly threw a no-hitter in his second big-league start in 1998. But two years later, Halladay suffered arguably the worst season by any pitcher in baseball history. He was months away from being out of the game.

Hall of Fame pitchers do not struggle like that. But Halladay vowed to change. He altered his pitching mechanics and rewired his brain to become one of the greatest pitchers of all time. How did Doc do it? Doc: The Life of Roy Halladay tells the remarkable story; based on more than 100 interviews with Halladay’s family, friends, managers, coaches, teammates, and competitors, including extensive interviews with his wife, Brandy; comprehensive archival research; and previously unpublished commentary from Halladay himself. Doc not only tells the story of Halladay’s illustrious baseball career in Toronto and Philadelphia, but his hard-driven adolescence, his lifelong personal struggles, and his motivation to pay forward the knowledge and philosophies that helped him achieve baseball greatness before his tragic death in 2017.

This essential biography is a testimonial for baseball players and pitchers from high school to the big leagues still searching for their path to excellence, like Halladay. It’s also a celebration and a profound exploration of a generational pitcher and a beloved teammate, friend, and family man.