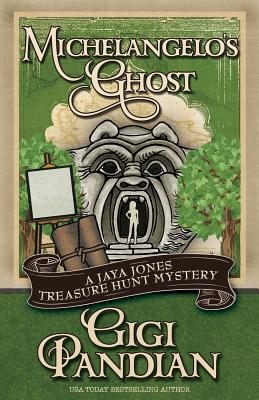 This is book number 4 in the Jaya Jones Treasure Hunt Mystery series.

"Has everything a mystery lover could ask for: ghostly presences, Italian aristocrats, jewel thieves, failed actors, sitar players, and magic tricks, not to mention dabs of authentic history and academic skullduggery." - Publishers Weekly

"Pandian's sprightly prose celebrates the pleasures of Italian painting, food, and landscape. The light touch, swift pace, and verve maintained throughout the novel disguise the deeper thought and scholarship underpinning the story, which like the stage props of a conjurer, make the magic happen."- Linda Lappin, Author of Signatures in Stone: A Bomarzo Mystery

A lost work of art linking India to the Italian Renaissance. A killer hiding behind a centuries-old ghost story. And a hidden treasure in Italy's macabre sculpture garden known as the Park of Monsters...

Filled with the unexpected twists, vivid historical details, and cross-cultural connections Pandian is known for, Michelangelo's Ghost is the most fast-paced and spellbinding Jaya Jones novel to date.

When Jaya's old professor dies under eerie circumstances shortly after discovering manuscripts that point to a treasure in Italy's Park of Monsters, Jaya and her brother pick up the trail. From San Francisco to the heart of Italy, Jaya is haunted by a ghost story inexorably linked to the masterpieces of a long-dead artist and the deeds of a modern-day murderer. Untrustworthy colleagues, disappearing boyfriends, and old enemies--who can Jaya trust when the ghost wails?

Part of the Henery Press Mystery Series Collection, if you like one, you'll probably like them all...

USA Today bestselling author Gigi Pandian is the child of cultural anthropologists from New Mexico and the southern tip of India. She spent her childhood being dragged around the world, and now lives in the San Francisco Bay Area. Gigi writes the Jaya Jones Treasure Hunt mysteries, the Accidental Alchemist mysteries, and locked-room mystery short stories. Gigi's fiction has been awarded the Malice Domestic Grant and Lefty Awards, and been nominated for Macavity and Agatha Awards. Find her online at www.gigipandian.com.