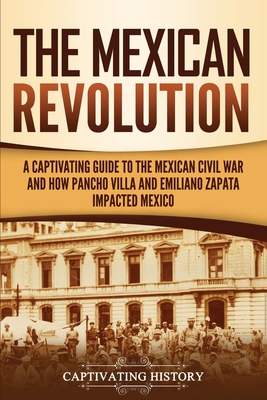 If you want to discover the captivating history of the Mexican Revolution, then keep reading...

The Mexican Revolution was a defining moment of the 20th century. The Mexican fight for democracy, equality, and justice sent shockwaves around the world. No other episode in its history has left a deeper mark. It is a three-act drama full of politics, persecution, and war, not to mention earthquakes, signs in the sky, and even spiritualist sessions, while being populated by larger-than-life villains, international spies, and the universally known figures of Pancho Villa and Emiliano Zapata. In fact, our modern idea of "revolution" owes much to what happened in this country between 1910 and 1920.

Although the uprisings of the oppressed classes have occurred since antiquity, Mexico in the 20th century is a unique case-this was the first triumphant popular revolution that, unlike others, was able to establish a popular government that carried out extensive social transformations without resorting to state terror, as was the case in the Soviet Union and China. It integrated marginalized groups into national life, and it gave birth to a refurbished nation, where, for a hundred years, there has not been a new coup d' tat, a problem that devastated other Latin American countries during the 20th century.

In The Mexican Revolution: A Captivating Guide to the Mexican Civil War and How Pancho Villa and Emiliano Zapata Impacted Mexico, you will discover topics such as

So if you want to learn more about the Mexican Revolution, scroll up and click the "add to cart" button