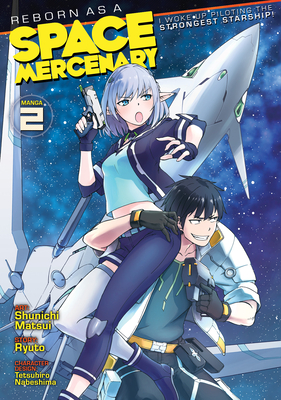 ANOTHER DAY, ANOTHER DOL—GALACTIC WAR?!

Reborn into a universe much like his favorite game, Stella Online, Hiro wants nothing more than to retire planetside. To turn that dream into reality, he’s been working as a space mercenary and making some serious bank.

With a fat wallet, a beautiful girl by his side, and a poor little space elf as first mate, it seems like smooth sailing ahead. That is, until he’s caught in a conflict between the Grakkan Empire and the Belbellum Federation!

Join Hiro and his crew as they push his beloved, overpowered, starship to its limits in an epic galactic war!

Ryuto is a Japanese writer best known for The 29-year-old Bachelor Lived Freely in a Different World, Reborn as a Space Mercenary: I Woke Up Piloting the Strongest Starship!, and Survival in Another World with My Mistress!

Shuinichi Matsui is a Japanese manga artist best known for the manga adaptation of Reborn as a Space Mercenary: I Woke Up Piloting the Strongest Starship!

Tetsuhiro Nabeshima is a prolific manga artist and illustrator who has worked on titles such as Dog and Scissors (Inu to Hasami wa Tsukaiyō), May Your Soul Rest in Magdala, Dual Life, and the light novel version of Reborn as a Space Mercenary: I Woke Up Piloting the Strongest Starship!