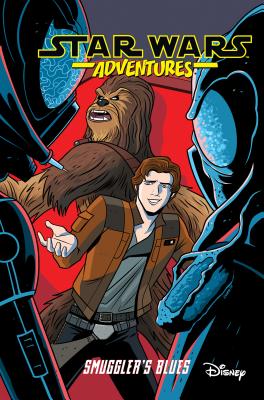 This is book number 4 in the Star Wars Adventures series.

Feared bounty hunters Zuckuss and 4-LOM are hot on the heels of the most notorious scoundrels in the galaxy, Han Solo and Chewbacca! To evade their pursuers, Han and Chewie will risk landing on an mysterious planet that somehow shuts down all electronics. With the Millenium Falcon unable to take off, how will the boys escape? Written by Cavan Scott with art by Derek Charm. Plus, a Lando Calrissian story by Elsa Charretier and Pierrick Colinet, and Jaxxon makes his Star Wars canon debut!

Collects the stories "Powered Down" and "Family Affair" from Star Wars Adventures issues #10 and #11 and the 2018 Free Comic Book Day issue, plus "The Lost Eggs of Livorno" from the 2018 Annual.

Cavan Scott is a writer whose credits include novels, comic books, children's activity books, audio plays, and short stories. He has worked on a large number of high-profile comic series including Doctor Who, Star Wars, Pacific Rim, Skylanders, Adventure Time, Pathfinder, Angry Birds, Judge Dredd, and Warhammer 40,000. His second Sherlock Holmes novel, Cry of the Innocents, was published in 2017.

Elsa Charretier is a French comic book artist and writer. She began at Image working on COWL, before moving to her own mini-series, The Infinite Loop, published by IDW. She's since worked on Starfire, DC's Bombshells and Harley Quinn, and Marvel's Unstoppable Wasp. She's also drawing Windhaven, by George RR Martin, out in 2018.

Pierrick Colinet writes comics. In France, he worked on The Guardian of the Republic and Aeternum Vale, both published in 2014. Next came The Infinite Loop, a science fiction romance between two women, and its sequel, The Infinite Loop 2: Nothing But The Truth, published by IDW. He is developing projects for various publishers.

"Full of character-enriching anecdotes and lore which only compliments the feature films and animated TV shows." –Comic Buzz