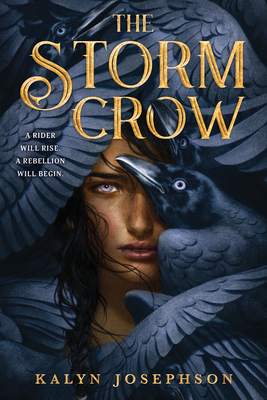 This is book number 1 in the Storm Crow series.

The first book in Kalyn Josephson's "must-read" (Adrienne Young) Storm Crow duology, a YA fantasy series that follows a fallen princess who ignites a rebellion, perfect for fans of Sarah J. Maas, Leigh Bardugo and And I Darken.

Princess Thia was born to be a crow rider—a warrior. In her kingdom of Rhodaire, magical elemental crows keep the city running. But when the Illucian empire invades, they kill all the crows in a horrible fire that also robs Thia of her mother and mentor.

Then Thia's sister, Caliza, becomes the new queen of Rhodaire, she is forced to agree to a marriage between Thia and the Illucian heir in an effort to save her people. Prince Ericen is rude and cruel and Thia can't imagine traveling into the heart of an enemy city after so much has been taken from her.

But before she leaves, she finds a crow egg in the rubble of the rookery. Deep in the heart of Ilucia she must hatch the last crow, hold her own against the crown prince, and ignite a rebellion to take back what is hers.

Also in this series:

Praise for The Storm Crow:

"Clashing kingdoms, thrilling action, and an imperfect heroine make this a must-read."—ADRIENNE YOUNG, New York Times bestselling author of Sky in the Deep and The Girl the Sea Gave Back

"[A]mbitious worldbuilding and an engaging premise…; Anthia's battle with depression is portrayed with frank authenticity, and features well-developed LGBTQ in the Deep characters."—Publishers Weekly

Kalyn Josephson is a fantasy writer living in the California Bay Area. She loves books, cats, books with cats, and making up other worlds to live in for a while. She is the author of The Storm Crow and The Crow Rider. Visit her at kalynjosephson.com.