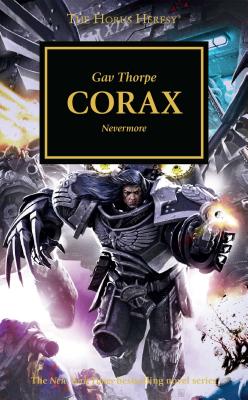 By Gav Thorpe
Email or call for price
Hard to Find

This is book number 40 in the The Horus Heresy series.

The Raven Guard primarch Corax and the remnants of his once mighty Legion wage a guerrilla war to liberate worlds oppressed by the traitor forces.

After Isstvan, after Deliverance, the Raven Guard still endure. Their primarch Corvus Corax has rallied countless warriors to his banner, striking back at the forces of the Warmaster on every front – from the degenerate hereteks of the Mechanicum to the cruel legionaries of the Sons of Horus, none shall escape his wrath. But although Corax has managed to stall the physical corruption of his own Space Marines, what of their spirit? And what sinister end must await those who dwell forever in the darkness? The saga of the primarch Corax comes to its grim conclusion in this anthology, which collects together the novellas Soulforge, Ravenlord and Weregeld along with several short stories.

Gav Thorpe is the author of the Horus Heresy novels Deliverance Lost, Angels of Caliban and Corax. He is particularly well known for his Dark Angels stories, including the Legacy of Caliban series and the Space Marine Legends novel Azrael. His Warhammer 40,000 repertoire further includes the Path of the Eldar trilogy, The Beast Arises novel The Beast Must Die, and the Phoenix Lords novels Asurmen and Jain Zar. Gav has also penned  many Warhammer fantasy novels, including The Sundering trilogy and the End Times novel The Curse of Khaine. For the Warhammer Age of Sigmar setting, he is the author of the novel Warbeast in the Realmgate Wars series. He lives and works in Nottingham, UK.