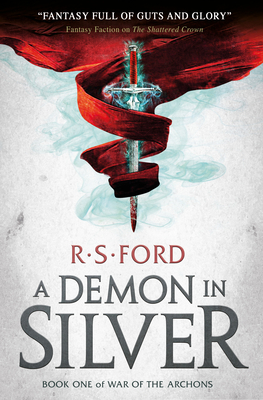 In a world where magic has disappeared, rival nations vie for power in a continent devastated by war.


When a young farm girl, Livia, demonstrates magical powers for the first time in a century there are many across the land that will kill to obtain her power. The Duke of Gothelm’s tallymen, the blood-soaked Qeltine Brotherhood, and cynical mercenary Josten Cade: all are searching for Livia and the power she wields.


But Livia finds that guardians can come from the most unlikely places… and that the old gods are returning to a world they abandoned.

Richard Ford is the author of Kultus, a steampunk novel published by Solaris and the epic fantasy trilogy Steelhaven for Headline. He comes from Yorkshire originally but now lives in Wiltshire, UK.

"Exciting and fast-paced. Fans of the author’s Steelhaven trilogy will look forward to this proposed fantasy trilogy about warring gods and the humans caught in their midst." - Booklist

“terrifically written high grimdark fantasy, far and away the most fun I’ve had with the genre since early Ciaphas Cain“

“a joy to read” Erlebnisse

“the perfect snack between ‘Game of Thrones’ seasons” Fangirl Nation