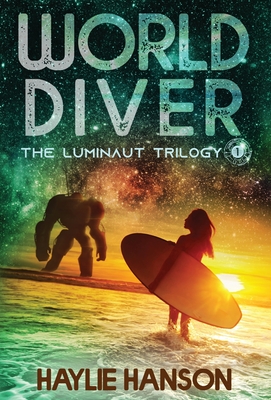 Then she discovers a mysterious glowing rod under the ocean surface, and her entire world turns upside down.

One, her hands start glowing (weird). Two, she can now control people (awkward). Three, she accidentally brings her robotics project to life. Classes were hard enough without her robot Nemo literally eating her homework.

Only the reclusive Dr. Ormandi knows the truth: Callie is a Luminaut (aka a light wizard) and it's her destiny to reunite the shattered multiverse by collecting all the Light Cores (aka the glowsticks of doom) in all the other worlds. To do this, she must repair the World Diver, the fifty-foot tall robot lurking in Dr. Ormandi's basement hangar.

As Callie learns about her Luminaut powers, Nate crash lands into her life. He's hot. Funny. Crazy about her. One problem: he's technically dead. Oh, and he insists uniting the multiverse will destroy everything.

Pursued by murderous interdimensional phantoms and plagued by insecurities, Callie must protect her family and friends, while figuring out who to trust.

And all before a deadly, looming evil snuffs out her Light for good.

A sassy YA science fantasy with adventure, STEM, a bit of romance, and an adorable robot.