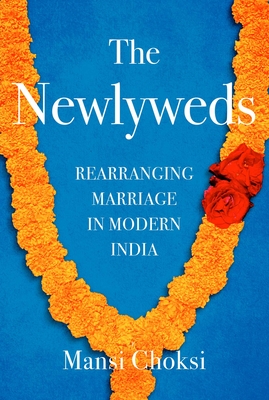 A literary investigation into India as a society in transition through the lens of forbidden love, as three young couples reject arranged marriages and risk everything for true love in the midst of social and political upheaval.

In India, two out of every three people are under the age of thirty-five. These are men and women who grew up with the internet and the advent of smartphones and social media. But when it comes to love and marriage, they’re expected to adhere to thousands of years of tradition. It’s that conflict between obeying tradition and embracing modernity that drives journalist Mansi Choksi’s The Newlyweds.

Through vivid, lyrical prose, Choksi shines a light on three young couples who buck against arranged marriages in the pursuit of true love, illustrating the challenges, shame, anger, triumph, and loss their actions and choices set in play.

Against the backdrop of India’s beautiful villages and cities, Choksi introduces our newlyweds. First, there’s the lesbian couple forced to flee for a chance at a life together. Then there’s the Hindu woman and Muslim man who escaped their families under the cover of night after being harassed by a violent militia group. Finally, there’s the inter-caste couple who are doing everything to avoid the same fate as a similar couple who were burned alive.

Engaging and moving, The Newlyweds raises universal questions, such as: What are we really willing to risk for love? If we’re lucky enough to find it, does it change us? If so, for the better? Or for the worse?

Mansi Choksi is a graduate of the Columbia School of Journalism and two-time Livingston Award Finalist. Her writing has appeared in The New York Times, The New Yorker, Harper’s Magazine, National Geographic, The Atlantic, and more. She lives in Dubai with her husband and son. The Newlyweds is her first book. Follow her on Twitter @Mansi_Choksi.

"If you believe in great love stories, read Mansi Choksi's The Newlyweds. In this exemplary work of narrative nonfiction, Choksi follows three Indian couples for six years to bring us the most nuanced, lyrical, and moving book about love and marriage in modern India yet written. Essential reading for anyone seeking to understand youth in India today—or for anyone who believes in the galactic powers of love to change history, personal and political."—Suketu Mehta, author of Maximum City: Bombay Lost and Found

“The Newlyweds is stunning. It’s a sharp and moving exploration of the relationships of three embattled couples; the writing is beautiful and the storytelling blindingly clear. Mansi Choksi looks at love in modern India with the appealing perspective of both a knowing insider, and a curious, wary outsider. The result is an intimate story of India, and of the perils and pleasures of love, like no other.”—Alexis Okeowo, New Yorker staff writer, and author of A Moonless, Starless Sky: Ordinary Women and Men Fighting Extremism in Africa

“[Choksi] skillfully uses these human stories to highlight the dangerous trajectory of Hindu fundamentalism under the regime of current Prime Minister Narendra Modi. Her descriptions are rife with detail and, at times, truly lyrical. A moving and largely well-reported account of love in modern India.”—Kirkus

“The Newlyweds is a remarkable work of storytelling that penetrates deep into the heart of India to give us an unforgettable portrait of love in dangerous times. Choksi invites us into the lives of working class Indians, often from families who live close to each other but come from worlds apart. These couples struggle against the grand social forces that are shaping the destinies of billions across the planet—and also against the tensions and contradictions of love that are as old as time. With writing that is beautiful, intimate, and moving, The Newlyweds is a masterpiece of reportage that will change the way you see India—and modern love.”—Anand Gopal, author of No Good Men Among the Living: America, the Taliban and the War Through Afghan Eyes

"Love is transformative, even when it fails. That is one of the lessons of The Newlyweds. And just as it is with love, I felt most alive when reading this book."—Amitava Kumar, author of A Time Outside This Time

“Choksi debuts with an engrossing study of traditional matchmaking and modern youth in India. She fluidly traces the path each couple navigated from parental home to independence and persuasively analyzes the economic, religious, and cultural stresses they endured. This is a heart-wrenching and inspiring portrait of love under pressure.”—Publishers Weekly

"An interesting and highly readable examination of the complexities and intersections of love, marriage, and tradition in India."—Library Journal