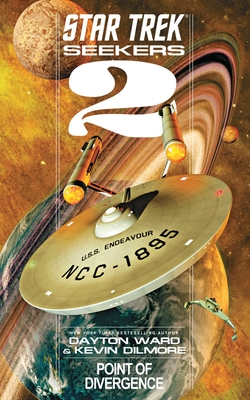 A thrilling Star Trek novel following two of Starfleet’s best starships on a quest to discover the secrets of a mysterious, uncolonized region.

The Tomol are a primitive civilization occupying a lone island on a remote world. Their culture is an enigma, centered on every member’s commitment to a painful, fiery self-sacrifice upon reaching maturity. But one of their clan has shunned this obligation, triggering a transformation into a new, powerful life form. Answering the distress call of the U.S.S. Sagittarius—which has crashed on the planet following a fierce battle with the Klingons—Captain Atish Khatami and the crew of the U.S.S. Endeavour must now attempt a rescue mission…even as they are locked in battle with the evolving, increasingly malevolent Tomol who, if allowed to escape their home world, pose an imminent threat to the entire galaxy.

Dayton Ward is the New York Times bestselling author or coauthor of nearly forty novels and novellas, often working with his best friend, Kevin Dilmore. His short fiction has appeared in more than twenty anthologies, and he’s written for magazines such as NCO Journal, Kansas City Voices, Famous Monsters of Filmland, Star Trek, and Star Trek Communicator, as well as the websites Tor.com, StarTrek.com, and Syfy.com. A native of Tampa, Florida, he currently lives in Kansas City, Missouri with his wife and two daughters. Visit him on the web at DaytonWard.com.

Kevin Dilmore has teamed with author Dayton Ward for fifteen years on novels, shorter fiction, and other writings within and outside the Star Trek universe. His short stories have appeared in anthologies including Native Lands by Crazy 8 Press. By day, Kevin works as a senior writer for Hallmark Cards in Kansas City, Missouri. A graduate of the University of Kansas, Kevin lives in Overland Park, Kansas.