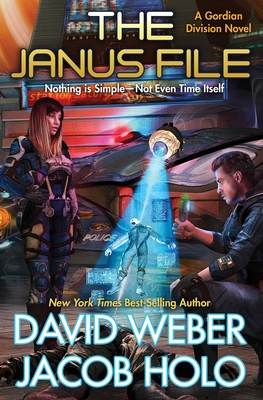 This is book number 3 in the Gordian Division series.

The fates of universes aren’t the only things time travel can impact. Sometimes the effect is a lot more mundane and closer to home. And when that happens, it’s up to the cops of Themis Division to make time turn out right.

It was supposed to be a routine trip for the members of the Gordian Division, both human and AI: fly out to Saturn, inspect the construction of their latest time machines, then fly back.

But when the division’s top scientist and chief engineer are killed in the same freak accident, suspicions of foul play run deep. Detective Isaac Cho is sent in to investigate, but he has more on his mind than just a new case. His superiors have saddled him with an exchange officer from the neighboring Admin—Special Agent Susan Cantrell—whose notion of proper “law enforcement” involves blowing up criminals first and skipping questions entirely.

Despite his objections, Cho is stuck with an untested partner on a case that increasingly reeks of murder and conspiracy. The unlikely pair must work together to unravel this mystery, and soon they discover their unique combination of skills might just provide the edge they need.

But nothing is ever simple where the Gordian Division is involved.

Not even time itself.

About The Janus File:

“A satisfying, self-contained mystery for its mismatched protagonists to gradually unravel…moments of humor amid the expected culture clashes, and the exploration of the authors’ well-realized far-future world . . . It’s pure entertainment.” —Publishers Weekly

About prequel The Gordian Protocol:

About David Weber:
“[A] balanced mix of interstellar intrigue, counterespionage, and epic fleet action . . . with all the hard- and software details and tactical proficiency that Weber delivers like no one else; along with a large cast of well-developed, believable characters, giving each clash of fleets emotional weight.” —Booklist

“[M]oves . . . as inexorably as the Star Kingdom’s Grand Fleet, commanded by series protagonist Honor Harrington. . . . Weber is the Tom Clancy of science fiction. . . . His fans will relish this latest installment. . . .” —Publishers Weekly

“This entry is just as exciting as Weber’s initial offering. . . . The result is a fast-paced and action-packed story that follows [our characters] as they move from reaction to command of the situation. Weber builds Shadow of Freedom to an exciting and unexpected climax.” —The Galveston County Daily News

“Weber combines realistic, engaging characters with intelligent technological projection and a deep understanding of military bureaucracy in this long-awaited Honor Harrington novel . . . . Fans of this venerable space opera will rejoice to see Honor back in action.” —Publishers Weekly

“This latest Honor Harrington novel brings the saga to another crucial turning point. . . . Readers may feel confident that they will be Honored many more times and enjoy it every time.” —Booklist

“An entertaining sci-fi action novel with light overtones of dystopian and political thrillers.” —Kirkus on The Dragons of Jupiter

With more than eight million copies of his books in print and 33 titles on the New York Times bestseller list, David Weber is a science fiction powerhouse. In the vastly popular Honor Harrington series, the spirit of C.S. Forester’s Horatio Hornblower and Patrick O’Brian’s Master and Commander live on—into the galactic future. Books in the Honor Harrington and Honorverse series have appeared on 21 bestseller lists, including The Wall Street Journal, The New York Times, and USA Today. Additional Honorverse collaborations include the spin-off miniseries Manticore Ascendant with New York Time best-selling author Timothy Zahn; and with Eric Flint, Crown of Slaves, Cauldron of Ghosts, and To End in Fire contribute to Weber’s illustrious list of New York Times and international bestsellers.

Best known for his spirited, modern-minded space operas, Weber is also the creator of the Oath of Swords fantasy series and the Dahak Saga, a science fiction and fantasy hybrid. Weber has also engaged in a steady stream of best-selling collaborations: the Starfire series with Steve White; the Empire of Man series with John Ringo; the Multiverse series with Linda Evans and Joelle Presby; and the Ring of Fire series with Eric Flint.

Jacob Holo is a former-Ohioan, former-Michigander living in sunny South Carolina. He describes himself as a writer, gamer, hobbyist, and engineer who started writing after his parents bought him an IBM 286 desktop back in the ’80s. He’s been writing ever since.