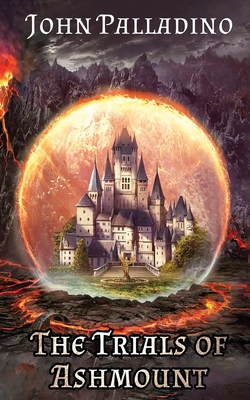 Cedain is destined to collapse.

Across a world rife with blood, betrayal, and brutality, five people wade through unexpected tragedies.

An egotistical student, a fleeing refugee, a nomadic warrior, a fallen noble, and a criminal in hiding navigate the sinister dealings of politicians, two sudden wars, and nefarious lies that surface at Ashmount-a university dedicated to teaching the five branches of magic.

Fans of Joe Abercrombie and hard magic systems will enjoy navigating a morally gray cast of characters in a world on the brink of collapse.

Praise for The Trials of Ashmount:

"In creating this complex world, brimming with nefarious characters, political backstabbing, and personal deceit, the author proves himself to be a promising new voice in grimdark fiction." - Grimdark Magazine

"Combining grit, drama, humor and tragedy, The Trials of Ashmount is a very promising debut and solid start to this series. Fans of Joe Abercrombie, Rob J. Hayes, and Ed McDonald, this is for you." - FanFiAddict

"Palladino's debut novel is a promising start to his fantasy series, and he has created a deliciously brutal, grimdark world, filled with a whole horde of colourful characters. If you are a fan of grimdark fantasy, you will lap this up like a cat to milk." - Before We Go Blog

"The Trials of Ashmount was a great read with plenty of action, skulduggery, and skulfuckery, and one that I enjoyed from start to finish." - Queen's Book Asylum

"There is not one single thing I would change about this book, hence the 5 star rating." - The Nerdy Narrative

"And what a magic system. There are so many of these in epic fantasy these days that it's tough to really make a standout one. But with this, Palladino hits the target and then brutally eviscerates said target." - E.L. Crocker, Goodreads Reviewer

"This debut novel does all the right things: immerses you in a fresh and new fantasy world, develops a new magic system, describes action in fluid and thrilling ways and keeps the reader turning pages, leaving us wanting more." - J. H. Sageman, Goodreads reviewer.