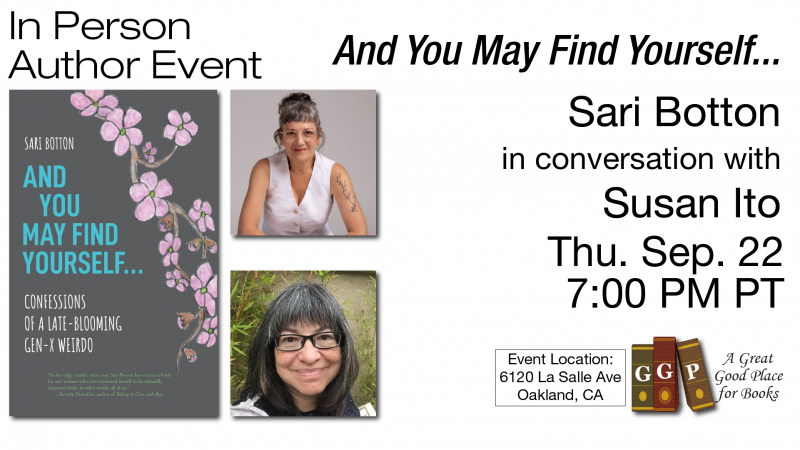 Please join us on Thursday, September 22, 2022 at 7:00 PM Pacific Time for an IN PERSON author discussion as Sari Botton discusses her new memoir AND YOU MAY FIND YOURSELF... with author Susan Ito.

Order your copy of AND YOU MAY FIND YOURSELF... at https://bit.ly/ggpFindYourself.

AND YOU MAY FIND YOURSELF… by Gen-X author Sari Botton, is about “finding” yourself later in life— after first getting lost in all the wrong places. As Botton discovers, the wrong places famously include her own self-suppression and misguided efforts to please others (mostly men). In a series of candid, reflective, sometimes humorous essays, Botton describes coming to feminism and self-actualization as an older person, second (and third and fourth) chances—and how maybe it’s never too late to find your way… assuming you’re lucky enough to live long.

While mainly presented in a chronological arc, the stories in this episodic memoir lend themselves to being read in order, or individually, as stand-alone pieces.

As a woman born in the mid ’60s, during the first wave of Generation X, I came of age at the intersection of two conflicting attitudes: “should” and “whatever.” I internalized both, and as a result, have zig-zagged between those poles throughout my life…While so many people I grew up with have lived their lives in one straight line, the trajectory of my life has looked more like scribble-scrabble. It’s been one messy adulthood, and a slow process of becoming. —Sari Botton

Sari Botton is a writer and editor living in Kingston, NY. Her work has appeared in the New York Times, the Guardian, and elsewhere. She is a contributing editor at Catapult, and the former Essays Editor for Longreads. She edited the award-winning, bestselling anthologies Goodbye to All That: Writers on Loving and Leaving New York and Never Can Say Goodbye: Writers on Their Unshakable Love for New York. She teaches creative nonfiction at Wilkes University, Catapult, and Bay Path University. She publishes the newsletters Oldster Magazine, Memoir Monday, and Adventures in Journalism. @saribotton