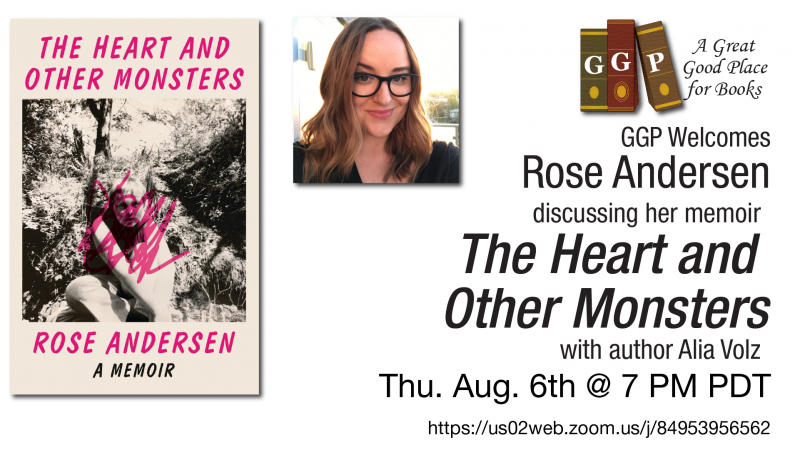 Please join us on Thursday, August 6, 2020 at 7 PM PDT for an online discussion with author Rose Andersen discussing her new memoir, THE HEART AND OTHER MONSTERS, with author Alia Volz.

(Order your copy of THE HEART AND OTHER MONSTERS at https://bit.ly/ggpHeartMonsters.)

"Impossible to put down. It haunts me still.” -Alex Marzano-Lesnevich, author of The Fact of a Body: A Murder and a Memoir

In November 2013, Rose Andersen's younger sister Sarah died of an overdose in the bathroom of her boyfriend's home in a small town with one of the highest rates of opioid use in the state. Like too many of her generation, she had become addicted to heroin. Sarah was 24 years old.

To imagine her way into Sarah's life, Rose revisits their volatile childhood, marked by their stepfather's omnipresent rage and their father's pathological lying. As the dysfunction comes into focus, so does a broader picture of the opioid crisis and the drug rehabilitation industry in small towns across America. And when Rose learns from the coroner that Sarah's cause of death was a methamphetamine overdose, the story takes a wildly unexpected turn.

As Andersen sifts through her sister's last days, we come to recognize the contours of grief and its aftermath: the psychic shattering which can turn to anger, the pursuit of an ever-elusive verdict, and the intensely personal rites of imagination and art needed to actually move on.

Reminiscent of Alex Marzano-Lesnevich's The Fact of a Body, Maggie Nelson's Jane: A Murder, and Lacy M. Johnson's The Other Side, Andersen's debut is a potent, profoundly original journey into and out of loss.

Rose Andersen received her MFA in writing at California Institute of the Arts, where she was awarded the Emi Kuriyama Thesis Prize. Her essays have appeared in The Cut, Glamour, and elsewhere. She lives in LA with her spouse, Josh, and their dog, Charlotte.

"Visceral . . . Part story of America’s opioid crisis, part grief memoir, and part tale of a possible murder, Andersen’s deeply personal book roils with anger and empathy that, at its very heart, is a lament for the profound hole left in the wake of a sister’s tragic death." - The Daily Beast, “Best Summer Reads”

The Heart and Other Monsters: A Memoir (Hardcover)