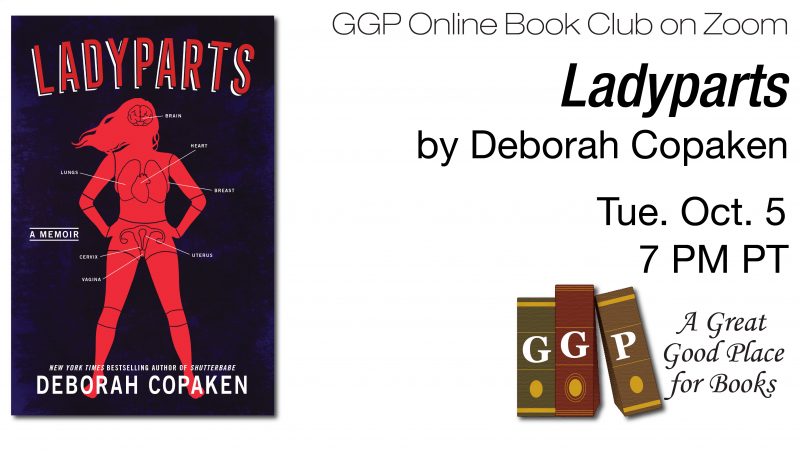 Please join us on Tuesday, October 5, 2021 at 7 PM PT for a GGP Online Book Club discussion of LADYPARTS by Deborah Copaken.

A frank, witty, and dazzlingly written memoir of one woman trying to keep it together while her body falls apart--from the "brilliant mind" (Michaela Coel, creator of I May Destroy You) behind Shutterbabe

"The most laugh-out-loud story of resilience you'll ever read and an essential road map for the importance of narrative as a tool of healing."--Lori Gottlieb, bestselling author of Maybe You Should Talk to Someone

I'm crawling around on the bathroom floor, picking up pieces of myself. These pieces are not a metaphor. They are actual pieces.

Twenty years after her iconic memoir Shutterbabe, Deborah Copaken is at her darkly comedic nadir: battered, broke, divorcing, dissected, and dying--literally--on sexism's battlefield as she scoops up what she believes to be her internal organs into a glass container before heading off to the hospital . . . in an UberPool.

Ladyparts is Copaken's irreverent inventory of both the female body and the body politic of womanhood in America, the story of one woman brought to her knees by the one-two-twelve punch of divorce, solo motherhood, healthcare Frogger, unaffordable childcare, shady landlords, her father's death, college tuitions, sexual harassment, corporate indifference, ageism, sexism, and plain old bad luck. Plus seven serious illnesses, one atop the other, which provide the book's narrative skeleton: vagina, uterus, breast, heart, cervix, brain, and lungs. Copaken bounces back from each bum body part, finds workarounds for every setback--she transforms her home into a commune to pay rent, sells her soul for health insurance, turns FBI informant when her sexual harasser gets a presidential appointment--but in her slippery struggle to survive a steep plunge off the middle-class ladder, she is suddenly awoken to what it means to have no safety net.

Side-splittingly funny one minute, a freak horror show the next, quintessentially American throughout, Ladyparts is an era-defining memoir.

Deborah Copaken is the New York Times bestselling author of several books, including Shutterbabe, The Red Book, andBetween Here and April. A contributing writer at The Atlantic, and she was also a TV writer on Emily in Paris, a performer (The Moth, etc.), and an Emmy Award-winning news producer and photojournalist. Her photographs have appeared in Time, Newsweek, and The New York Times. Her writing has appeared in The New Yorker, The New York Times, The Guardian, Financial Times, The Observer, The Wall Street Journal, The Nation, Slate, O: The Oprah Magazine, and Paris Match, among other publications. Her column, "When Cupid Is a Prying Journalist," was adapted for the Modern Love streaming series. She lives in Brooklyn with her family.