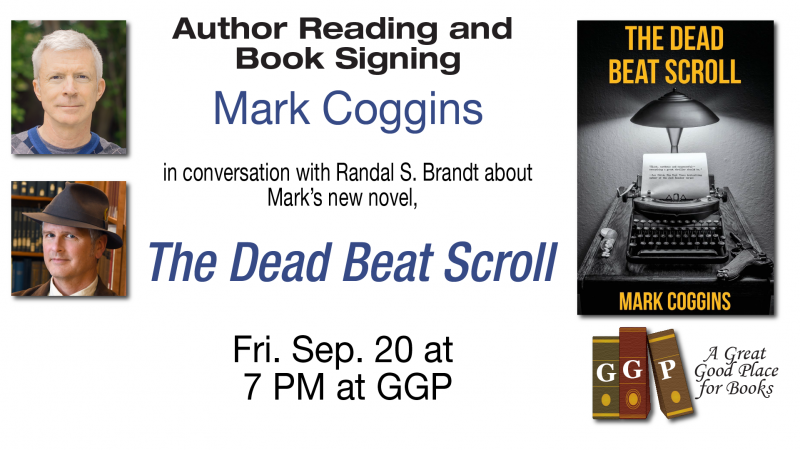 Please join us on Friday, September 20 at 7 PM at the store as we welcome author Mark Coggins discussing his new detective novel, The Dead Beat Scroll, with Randal S. Brandt, curator of the California Detective Fiction Collection at the University of California, Berkeley.

Synopsis: Private investigator August Riordan returns to San Francisco to avenge the death of his friend and one-time partner, Chris Duckworth. Duckworth has taken over Riordan’s old business, his old office and even his old apartment, and Riordan suspects Duckworth’s death is linked to the missing person case he was working when he died. An alluring young woman named Angelina hired Duckworth to look for her half-sister, but what Riordan finds instead is a murderous polyamorous family intent on claiming a previously unknown manuscript from dead Beat writer Jack Kerouac. Following clues from Duckworth and a trail of mutilated bodies left by the family, Riordan soon realizes that avenging his partner will first involve recovering the manuscript—and then saving Angelina and himself from kidnap, torture and death. As the bodies pile up, Riordan must work with old allies and enemies to untangle Duckworth’s last case before time runs out.

Praise for The Dead Beat Scroll:

“Slick, sardonic and suspenseful—everything a great thriller should be.” —Lee Child, bestselling author of the Jack Reacher novels

Mark Coggins’s work has been nominated for the Shamus and Barry crime fiction awards and selected for best-of-the-year lists compiled by the San Francisco Chronicle, the Detroit Free Press, and Amazon.com, among others. His novels Runoff and The Big Wake-Up won a Next Generation Indie Book Award and the Independent Publisher Book Award respectively, and his The Immortal Game has been optioned for a film.

Randal S. Brandt is a librarian at the University of California, Berkeley where, among other duties, he is the curator of the California Detective Fiction Collection. He also created the critically-acclaimed websites Golden Gate Mysteries (an annotated bibliography of crime fiction set in the San Francisco Bay Area) and A David Dodge Companion.