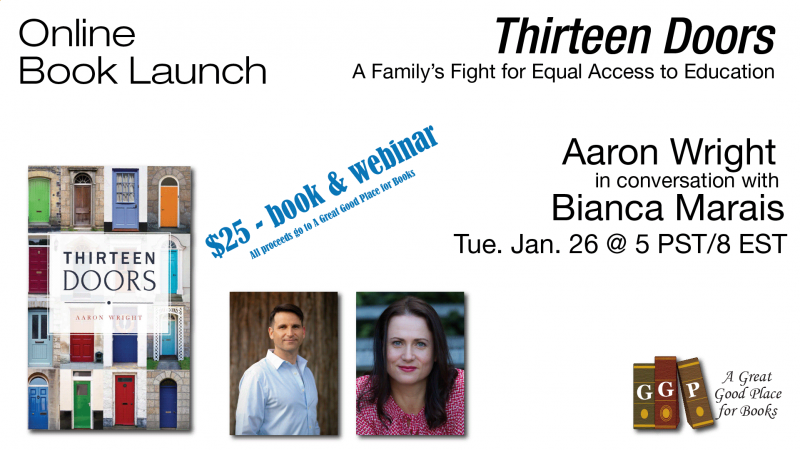 Buy this $25 ticket for a copy of the book plus admission to an online discussion on January 26, 2021 at 5 PM PST / 8 PM EST featuring author Aaron Wright discussing THIRTEEN DOORS: A FAMILY’S FIGHT FOR EQUAL ACCESS TO EDUCATION with author Bianca Marais.

Admission only (without a copy of the book) is $10 and is available at https://www.ggpbooks.com/product/13DoorsAdmissionOnly.

Aaron was raised in the heart of the Central Valley in California. He is the son of two educators—his father worked in special education and his mother in early childhood education. Aaron was raised with an awareness of, and appreciation for, access issues for marginalized and vulnerable students.

When his daughter was diagnosed with autism at an early age and initially denied access to special education, Aaron began a quest to understand, and ensure compliance with, the state and federal protections afforded disabled students.

As a nurse and disadvantaged student advocate, Aaron’s drive to understand how the public education system works became a passion. Early in his family’s journey toward a free and appropriate education for his daughter, he found that the issues were far larger than his family.

Quietly, Aaron began to pen his family’s journey in a memoir. A true labor of love, Thirteen Doors took more than four years to write.

Once the initial manuscript was complete, he gave it to his unsuspecting wife as a Mother’s Day gift. Over the course of another year and a half, the manuscript was revised, edited, and most importantly given the seal of approval by his daughter. Aaron’s ultimate hope is to engage a national audience in a deep and meaningful conversation about our most vulnerable students and how they are losing their access to a suitable education and what can be done to change the system that is traumatizing children and their parents.